If I had to encapsulate my academic aspirations into a single image, it would be the memory of sitting around the coffee table in the economics department lounge at Carleton, eating my professor’s homemade scones, drinking tea, and debating applied philosophy with professors and students. What a combination – professional, personal, erudite, homey, congenial, and combative. The fact that my professor – my freshman-year adviser, M, who fed my love of medical history, introduced me to economics, and continues to be a role model for my personal and professional life – would bring in homemade scones, or, at the very least, some fancy store-bought cookies, every Friday evening, was just the purest expression of academic love. She organized these discussion groups, which she called “The Orchard” after John Maynard Keynes and the Bloomsbury group, including George Bernard Shaw. Totally of our own volition, our little group of students and faculty would meet every Friday afternoon, after classes had finished, for no other reason than we enjoyed spending time together and having arguments. And eating scones.

And it wasn’t just Orchard members who got these scones. Every semester, M would bake the scones for every one of her classes and invite them each over to her house. So would M’s husband, R, who was my medieval Germanic literature professor. I was totally mortified at the end of my freshman year when my now-husband, J, asked M for the scone recipe as a gift for me. Because the recipe has a story behind it – supposedly, the original recipe was given to M by the owner of a Bed and Breakfast in England whose sister works in Buckingham Palace, and these scones are the same ones made for the Queen. Who knows if it’s really true? But of course M obliged and I have now been the proud owner of this recipe for over 10 years.

The way I make them has changed a little, because I couldn’t personally justify the amount of cream in them. And I’ve developed a few flavors that are my go-to add-ins, since I absolutely despise raisins and I don’t understand why the British put them in everything (and have so many different kinds! raisins, currants, sultanas? wtf is a sultana?). So here is my own little expression of academic love, in the form of my version of the Queen’s scones.

*A few notes about this recipe. First, is it pronounced scone or scon? I say if you’re American, go ahead and keep saying scone, because it sounds really stupid if you switch now. Own where you’re from. Second, regarding the style of scone: there is certainly a British and an American style of scone, and they are different things, neither of them is more correct. British scones are doughier and have more lift, American scones are crumblier and fattier. Biscuits (American) are not scones, even though they are similar. These scones are a bit between the two styles, but closer to the British – they get a bit crunchy on the outside, but have a breadier texture and are less rich than scones you might have had before. They are also moister than typical American scones, because of the yogurt. Finally, I don’t like to choose between sweet and savory, so I pretty much always make two half batches at the same time, so that I can have one of each.

The Queen’s Scones – Base recipe

1 1/2 tbsp. baking powder, and 1 tsp table salt, [and 2 tbsp. sugar for sweet scones]. Pinch in 1/2 cup (1 stick) unsalted butter, cut into small pieces or grated [for cheese scones, use half this amount, i.e. 4 tbsp.]. Stir in any solid flavorings, such as chocolate chips, dried fruit, chopped vegetables, cooked meat, shredded cheese, or herbs. Set aside. In a measuring cup, whisk together 1/2 cup milk, 1/2 cup full-fat yogurt (not Greek-style or strained), and 2 eggs [plus any extracts, like vanilla, or purees, like pumpkin]. Stir wet ingredients into dry, just until the dough forms – do not overmix, it’s fine if there are bits of flour still visible [at this point, cut in any soft additions, like goat cheese, so that you can distribute them but leave large pockets of them throughout].

Either chill the dough in the fridge, tightly covered, or immediately form scones. You can roll or pat out the dough, or just tear off clumps. My preferred method is to divide the dough in two and pat each half into a square 1-2″ thick, then cut the square into quarters and each quarter into two triangles.  Place the individual triangles 1″ apart on a baking sheet. Brush with an egg wash (a beaten egg thinned out with a tsp of water) for a shiny coating, or to make any herbs, salt, or sugar stick. Bake at 400 for 10 minutes, then turn the pan and lower to 350 for 5-8 minutes or until the edges are just starting to brown. Remove to a wire rack to cool. 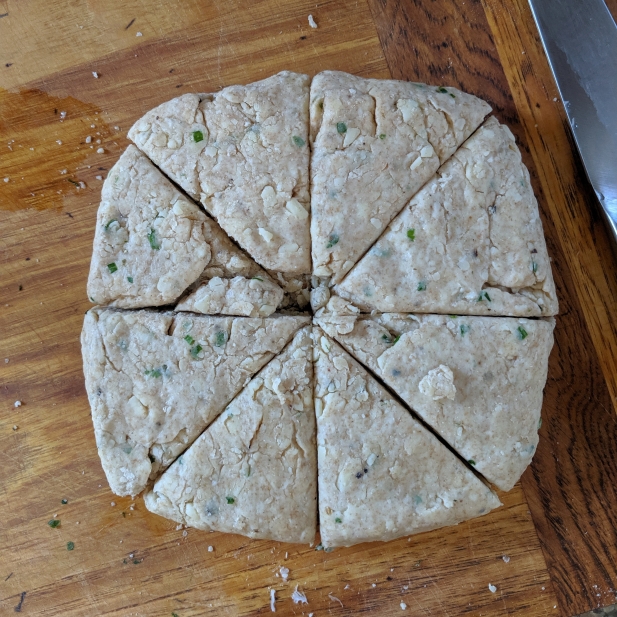 I have a signature scone (because I’m that special), and it’s cheddar-dill. Light and herby, the cheese gives the scone an extra bit of lift and crisp. But this time I had some gruyere in my fridge after I made grilled cheese sandwiches, and some chives because I couldn’t find dill. And for the sweet half of the batch, I pretty much always want chocolate and fruit, and I still had the flavor of these cookies on the tip of my tongue, so I chopped up some of the candied oranges I made for them and threw those in. 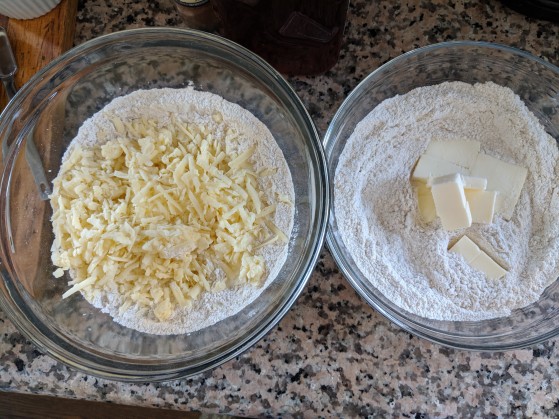 I start with two identical sets of dry ingredients. I put half the amount of butter in the bowl on the left, since I then added about a cup of shredded cheese.

Once the cheese and butter were pinched in, I added chopped chives and an absurd amount of cracked pepper.

On the sweet side, I tossed in chocolate chips and some chinese 5 spice.

Normally I would put dried fruit in with the dry ingredients, but these oranges were so sticky I could only get them to separate by mixing them in with the wet stuff. I also added some honey here instead of sugar. 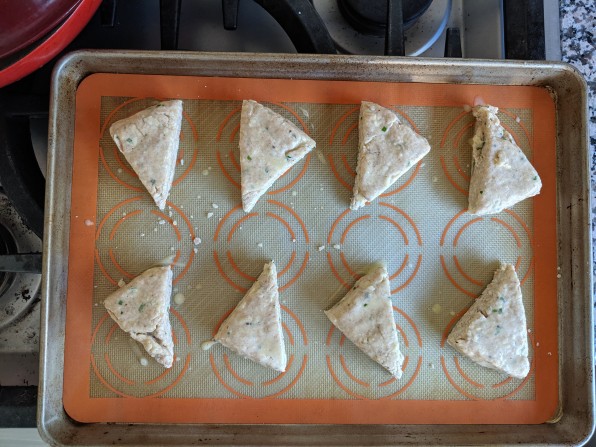