Italian food in the US is so standardized that unless you are eating at the fanciest of restaurants, there’s a good chance you’ve heard of or eaten pretty much all of the accepted Italian dishes out there. This is pretty typical of “ethnic” cuisines, by which I mean that when a large group of people move all around the same time from one country to another (or one region to another), the food they bring with them gets branded a certain way and set in stone. Italian food in the US was initially established by the wave of immigrants from southern Italy in the second half of the nineteenth century. This is where your typical red sauce restaurants come from, as well as Neapolitan pizza. It wasn’t until a century later that Americans got a taste of other regions on the boot and learned about sauces like Genoa-style pesto. (If you want a slightly more detailed version of this timeline, check out this article by Paul Friedman.)

Genoa-style pesto – pesto alla Genovese, is the full name for the sauce that most of us just know as pesto. It’s the ground up pine nuts, garlic, parmesan, and basil, held together with olive oil. Classic! And delicious! But also not the only pesto out there. In the same way that salsa in Spanish just means sauce, pesto just means paste – it’s pretty much any thick sauce.

When I first came to Sicily in 2016, I learned that in Palermo, they have their own standard pesto, which is made with pistachios. The sauce is green and nutty, just like the pesto I was used to, but not herby in the same way because there’s no basil. There’s no herbs of any kind. The pistachios are the herbs and the nuts of this sauce. In typical Sicilian fashion, where food should be as fatty as it can be (not in a bad way!), this sauce is just pistachios, olive oil, garlic, and cheese.

What surprised me about this initially was the fact that the pistachios were there at all. Aside from pistachio ice cream, which I hadn’t really thought of as an Italian thing (it very much is), I’d never associated pistachios with Italian cooking in particular. Wikipedia tells me that pistachios hail from Central and Western Asia originally, so I assume that right in my time period of interest (around the 10th-12th century, probably), Sicily was importing pistachios in an attempt to participate in Persian culture. I wasn’t really looking for pistachios when I was researching imported goods in Sicily, so I’m not sure whether this shows up in the trade records I’ve looked at. But it would make sense in that time period, when Arab Sicilians were consuming goods that they would be able to find in the markets of the eastern Mediterranean and Persia, and when Norman Kings (and perhaps an upper class that we pretty much never talk about) were interested in mimicking the culture of those same eastern Mediterraneans and Persians.

Today, pistachios are a signature ingredient in Sicilian cooking. It’s not that you’ll find them in a lot of recipes per se, but they just end up in everything. My last night on the dig three years ago, the restaurant that made us dinner every night made, for the occasion, a sort of dessert pizza, which was covered in Nutella and sprinkled with a ton of crushed pistachios (this is a great combination by the way, I highly recommend it). The outdoor market in Palermo sells pistachios in every form – raw, roasted, with or without salt, whole, shelled, chopped, crushed, or ground. It’s Sicilian home cooking that’s full of the nut, and after one meal my friend V and I made together, I totally understand why. We made a simple pan-fried sardines with gnocchi, and threw in garlic, parmesan, oil, and chopped pistachios – essentially, a Sicilian pesto. The nuts get a little softer and add that slightly sweet creamy flavor that makes them so good in ice cream. But with fish it just balances the whole thing, and adds a depth that you don’t tend to get with a fish as mild and straightforward as sardines. (For the record, sardines are also a huge part of a southern Italian diet, and it’s really a catch-all name for most small fish. Fresh, they’re just a delicate white fish, a little bit more flavorful than something like sole because they’re so small.)

Ok, so a recipe. I went looking for recipes for Sicilian pistachio pesto, but all the ones I could find had to add other stuff in that I think is pretty unnecessary. This really is not the place for basil or mint – it’s too much. If you must add an herb and want to be more Sicilian about it oregano is probably the way to go. But honestly, I think this is best with just basil, garlic, parmesan, and oil, and maybe a little lemon juice. You want this to stay chunky, and it’s nice to have a variation in size and texture on the nuts, so this is a good place to just throw a few nuts in a bag and smash them with a rolling pin. Use this as you would any pesto – on pasta, over chicken, spread on a sandwich. I highly recommend you try making pizza with it and throwing on some fresh summer vegetables, like corn and tomatoes, and going full Sicilian by topping it with ricotta. 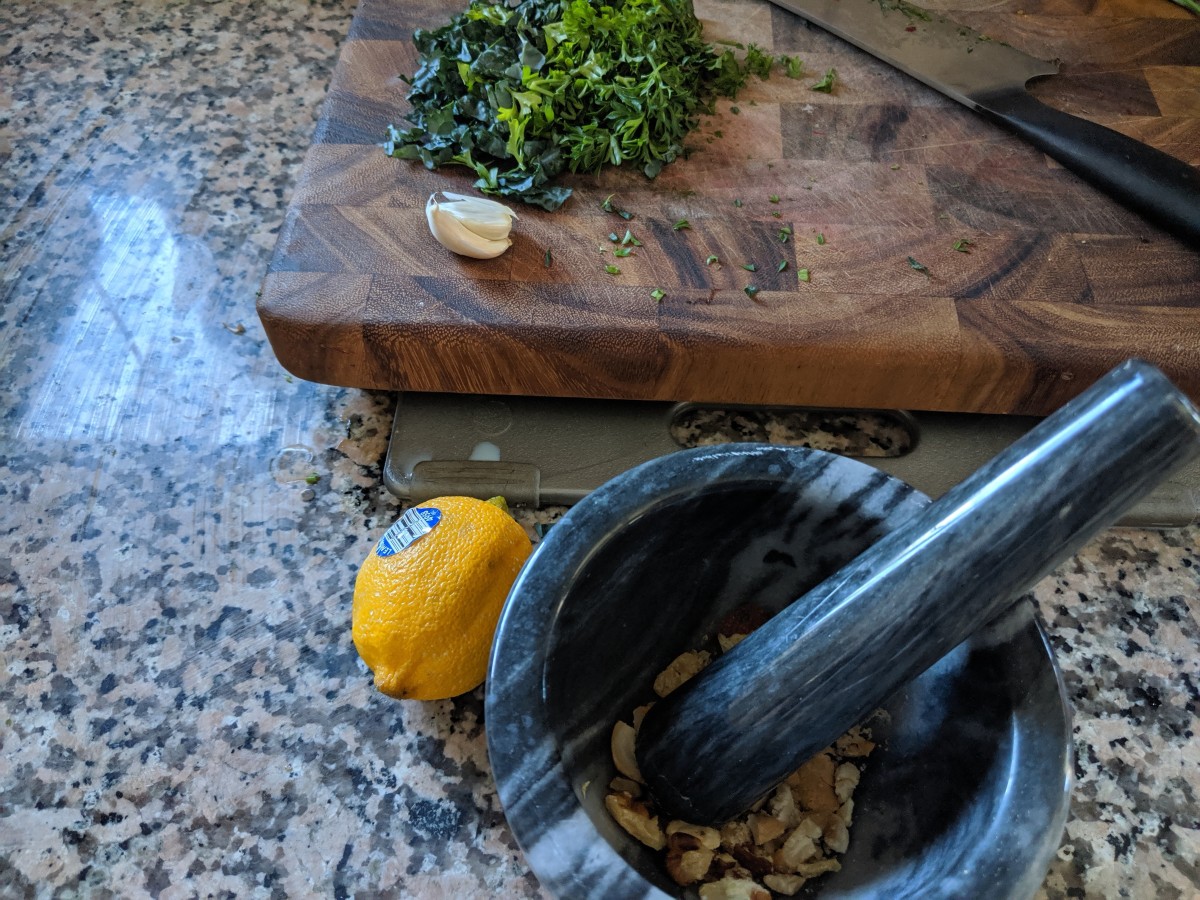 But I also wanted to try my own variation on this idea. So I made the following (without pistachios, because I was out), yielding just one portion:

Crush together: 1 stalk of kale (I prefer lacinato aka dinosaur), 3-5 sprigs of parsley (I prefer curly, minus the stems), 5-8 nuts (I did a mix of walnuts, cashews, and almonds, 1 clove of garlic, a pinch of kosher salt, a pinch of pepper, and a pinch of chili flakes or Aleppo pepper. Once everything is finely crushed, add the juice of half a lemon and about a tbsp. olive oil, and crush for another few seconds. Add to hot pasta with a little bit of the cooking water and serve.