I’m back in Europe again. I got a free pass into Vatican City, struggled with driving, and learned about the hidden gem that is Salerno.

I started this week on mainland Italy to stop at a few sites that are important to Norman history in the region and particularly translation, as well as to see a single manuscript at the Vatican Library. I had originally completely avoided looking in the Vatican’s collection because my sense was that it has plenty of manuscripts that are tangentially related to my project, but not actually what I’m looking for, and so going there would just send me down a rabbit hole. I caved for two reasons: 1) I was going to be in Rome for a day anyway because it takes a whole day of travel to get from California to Sicily; and 2) I learned that there is a 12th century Sicilian translation of Ptolemy at the Vatican. So that second point is really important and basically made it impossible for me not to go. The short version of this is that the work of Ptolemy, a classical Greek mathematician/astronomer/geographer, was only translated into Latin in Spain in the mid-13th century, based off the Arabic version of his work. Charles Homer Haskins (I need a quippy nickname for him – maybe Chuck?) discovered that someone in Sicily in the 12th century translated Ptolemy into Latin from the Greek, but that translation never got picked up, and as far as we know, the only manuscript of it is the early-14th century one in the Vatican. I care about this because I’m prepared to argue in my dissertation that there was essentially no Latin scholarship in Sicily proper in the Norman period, and this translation of Ptolemy is a pretty significant exception to that.

So off I went to the Vatican Library. If you didn’t know the Vatican has a library, don’t feel bad. Even the guys renting out the audio tour for the Vatican dome didn’t know. Like most research libraries, you probably only know about it if you are an academic. That’s especially true here because the Vatican Library won’t give you access if you’re not affiliated with a university (I have no idea if those rules also apply to priests). Relatedly, the information for where the library even is and how to get there is extremely sparse, but that’s kind of Italy in a nutshell. Hole-in-the-wall is kind of this entire country’s MO. So I wasted about an hour on the line to the dome before realizing that the entrance I needed was the next gate over. I explained where I was going to the Swiss Guard, who sent me to another guy, who sent me to a third guy, who sent me into a little passport office, where I left my passport, received a visitor’s pass, and was allowed access into the city. I thought this was pretty cool. It definitely felt like being given the secret password to a club. There are only a few buildings inside, so I kept walking until I found the library. From this point on it was a very typical research library experience – a secretary took my credentials, had me pose for a picture, and printed me an ID card. Actually, even though the card they gave me expires after a year, they told me to hold onto it because they can just renew my access if I come back. The retrieval system in the library was quick and easy – I put the manuscript number into a computer station at the circulation desk, and half an hour later my manuscript arrived on a cart. Unsurprisingly, the manuscript reading room looks like a chapel, with desks instead of pews. But it also has by far the best book stands – beautiful, adjustable height wood stands with removable dowels to hold the book open. I would have taken a picture, but photography is forbidden.

The manuscript I came to see turned out to be pretty useful. Not revelatory, but useful. It was a nice complement to the two other Ptolemy manuscripts I’ve seen, and it’s introduction explicitly discusses translation. It’s probably the first text I’ve seen in this project to use the word “Saracen” and definitely the first to use the word “Arabic”. I’m inclined to believe that the introduction was added to the 14th century copy of the manuscript and that it isn’t original to the text, but I have to read it a bit more closely to be sure.

On my way out, I did snap a couple of pictures of the garden inside the library (this is a church compound, after all, there has to be at least one cloister garden) and the courtyard/parking lot in front of the library. It struck me that this is a pretty rare sight and it was worth recording. And yes, there were plenty of other women (young and secular) inside the library.

This trip is my first time driving in a foreign country. And let me tell you, learning to drive in New York, Boston, and LA has certainly prepared me for Italy. As you might expect, this is a country if narrow, winding roads, unmarked two-way streets, and unenforced speed limits. I completely skipped driving in Rome proper because that seemed like a nightmare, but just driving down to Naples was already an experience. At least I got an automatic transmission car, despite my dad’s encouragement to take a stick shift class – there’s only so many skills I can learn for these trips, and my spoken Italian is already not good enough.

On my way south I took a planned detour to Cassino to see the Abbey of Montecassino (or, Monte Cassino, which for some reason is the slightly different medieval version of the name). I went back and forth on going to the abbey, and ultimately it was worth it but not super useful. There are three important points of history about Montecassino. The first is that in the early medieval period it was the foundational abbey of Benedictine monasticism, which is the sort of classic form of communal monasticism. The second is that it was a huge manuscript production center and in the Norman period it was home to several translators (only one from Arabic) and a chronicler who gives us one of the more detailed accounts of Norman Italy. The third is that despite its protected status as a site of both artistic and historical significance, the Allies (read: the US) bombed the abbey toward the end of WWII and destroyed it. The abbey was rebuilt in the 50s and reconsecrated in the 60s, so for a medieval historian, there’s not much to see. I mean, all your favorites are there –

But the basilica is very modern-baroque and there’s basically no mention of the translation movement. I also stopped at the archaeological site on the way up the hill (side note: a “monte” is not really a mountain – it’s a very large hill that’s usually heavily eroded, more like a mesa but without as dramatic a profile). The archaeological site is interesting if you already know a bit about Roman history, and it too took a lot of damage from the bombing. It’s also frozen at around the second century, even though the site was excavated and there were certainly medieval things there at some point.

I also took a trip to Salerno. I never had particularly high expectations for Salerno, especially after Monte Cassino was a let-down. And while the town itself is not so interesting historically (although it is very pretty), there is a medieval castle on the monte just above the city that’s amazing. It’s free to visit and walk around, it has a lovely little archaeological museum about the excavation of the castle, and the castle itself is largely intact (minus a roof) which is pretty rare in southern Italy.

I rode the elevator up to the castle (huh?) with pallets of fruit for the upcoming beer festival being held there.

Spectacular view from the top.

Can you tell I was excited to see this explanation of the metalworking facilities? And also that I was experiencing jetlag? 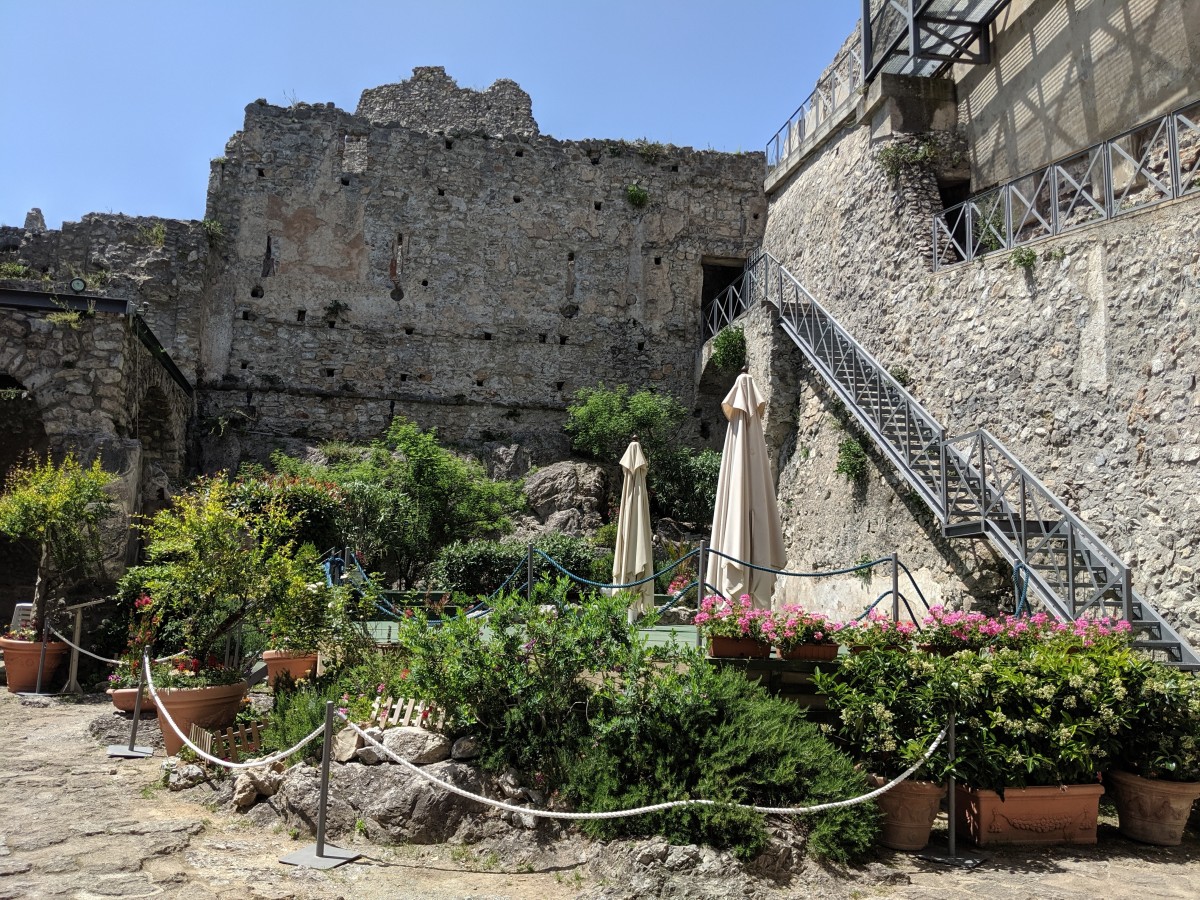 I don’t know about you, but I think this looks like a pretty cool place to have a beer festival.

The remains of a medieval oven.

Remains of a fresco on one wall – it looks like a palm or some other plant and a column.

One room inside the castle is dedicated to displaying regional wines. The next room has a poster explaining their different flavors.

Meanwhile, down in the city, the main church is guarded by two extremely Norman looking lions.

And the church has that Siculo-Norman pavement I’ve come to know and love.

The whole city is interspersed with bits of classical architecture, like this random little column.

So far I’ve learned that playing puzzle games has prepared me for real-world problem solving. There’s an entire genre of video games where the objective is really just to open a lot of doors – escape the room, deserted island, hidden object, etc. are all sub-genres of this type. And they tend to have a lot of lasers pointed at mirrors and hidden switches. So one delightful moment of confusion they helped me solve was getting out of the driveway attached to the apartment complex where I stayed in Naples. My first morning, I drove up to the gate to discover it partially open and totally unresponsive to my remote. I tried switches and locks and testing its laser eye for about five minutes before I turned the car back around to come back on foot with a cooler head. And lo and behold, I discovered that the gate has laser eyes on each side, and that the one on the street side had a plant leaning into its path, blocking it off from its target. The second I moved the plant, the gate closed and the remote worked again. This is literally a puzzle in every one of those games. This isn’t really such a big thing – it’s just an electric switch after all. But it’s a big deal when you’re by yourself, you don’t know the building manager, you have spotty contact with the owner of the apartment, your language skills aren’t good enough to communicate the problem to anyone, and you absolutely need to leave the building soon by car because there isn’t a real sidewalk and you have no food in your apartment. These things just raise the stakes.

Next week I arrive in Sicily and we see whether I can find anything useful or if I’m about to spend two months just eating gelato.